The current Australian Prime Minister, Scott Morrison was being heavily criticised by the Australian public regarding his responses to rape allegations between staff members from the Parliament House. With many traditional media companies utilising social media to report on Mr Morrison’s commentary about the issue, it becomes clear that evident media bias is fuelling the vilification of the Prime Minister.

In 2019, Former Liberal Staffer Brittney Higgins alleged that she was raped by a fellow colleague within the Defence Industry Minister’s office in Canberra’s Parliament House. Miss Higgins later resigned from her position due to the extreme distress the incident has caused her wellbeing. Following this, The Minister for Industry, Innovation and Science, Christian Porter was accused of raping a woman in January 1988, the victim of which took her own life in June of 2020.

As illustrated in Figure 1, these comparative Google Trends graphs outlines Australia’s the public interest in the rape allegations within parliament as the peak to 100, 83 and 53 between March 11 2021 to March 27 2021 outlining the seriousness of the allegations to Australian citizens. However, it becomes clear that Christian Porter’s rape allegations plateaus in the middle of March with Google searches remaining at zero until the present time. This suggests that Brittany Higgins allegations have evidently more public interest due to its existence as a reflection of consistent failures of the Parliament in dealing and recognising the seriousness and frequency of sexual harassment within the government institution.

In reference to a 2019 Reddit post by PolitQuoll, the image outlines the extent to which a selection of traditional Australian media companies, expressing a left leaning bias or a right leaning bias according to the political spectrum, with the middle illustrating the neutral, unbiased sources of news.

With ABC News and News.com being two of Australia’s largest media organisations, this chart clearly illustrates ABC News’ position in the centre where publications are expected to be neutral and free from bias. In effect, this positing solidifies the company’s professional reputation of delivering “fair, accurate and impartial news” as Former Australian Senator, Richard Alston suggests. However, News.com is situated to the right with a reputation of ‘mixed quality’ journalistic sourcing, evidently distinguishing the two media outlets from each-other. Despite this, Mr Alston further suggests that although the ABC is known for its quality unbiased publications “it is obsessed with the need for greater diversity in every field except for politics, where its views are overwhelmingly one-sided and always to the left.” Despite the expectation for the ABC’s sources to remain neutral Mr Alston claims that the media outlet would “much prefer to talk about holding government to account”; demonstrating activism in journalism as opposed to subscribing to the journalistic expectations of “honesty, fairness, independence and respect for the rights of others” as outlined in the Journalist Code of Ethics (MEAA).

When comparing the social media publications from both ABC News and News.com regarding the Parliament’s rape allegation saga, there is a significant contrast in the way the Scott Morrison’s approaches to the controversies are reported on, illuminating the left leaning nature of the ABC. This is made clear through the ABC’s frequent use of vilifying leads and article titles, where rather accusatory words and terms are used to suggest the Prime Minister’s inability in recognising and acting upon the seriousness of such claims as the leader of Australia. This is significantly visible when comparing the two articles illustrated in Figures 4 and 5.

With David Speers suggesting that the PM does not “have a plan for dealing with sexual harassment” provides its audience the negative sentiment that Scott Morrison is demonstrating in-adequate leadership in supporting women in Parliament. In suggesting that Mr Morrison has appeared “to have lost his footing” Speers subtly vilifies the Prime Minister by utilising evaluative and almost accusatory terms and phrases to illuminate his flawed recognition to the allegations, stating that usually “Scott Morrison likes to present as a man with a plan.” However in boldy describing the rape allegations as a “crisis gripping the nations attention and eroding support for the government” this paints the picture that Morrison is crumbling beneath the pressure that controversy has brought to his image as the Prime Minister and that he is far from prepared to deal with it all.

Speers also expresses a negative sentiment towards Morrison’s inadequate response to sexual harassment in Parliament stating that “It’s about more than dusting off and finally implementing recommendations from a report the government received 12 months ago” affirming the widely accepted and evidently obvious need for Morrison to take “the issues of sexual harassment and abuse far more seriously” than he already is. It becomes clear that Speer’s personal options have slipped into the construction of this analysis report, consistently reminding the audience, that the Prime Minister (in addition to elevating his approach to combating sexual abuse in parliament) needs to “show leadership, not engage in spreading blame” to avoid the pressure and damage that such negative accusations has had upon his government.

In referencing the March 4 Justice rally that took place in last month, making a comparison between ABC News’ and News.com’s manner of covering Scott Morrison’s approaches to the allegations, News.com evidently excludes accusatory and vilifying words and phrases in describing the Minister’s attempts to comment upon the saga unfolding within Parliament. The title of the article (as illustrated in Figure 4) states that the Prime Minister ‘won’t attend the March 4 Justice’ campaign, a fact that evidently infuriated a large majority of Australian women as it is a clear demonstration of a lack of support. However, this title is evidently devoid of left leaning activist sentiments that seem to slip through the cracks within the journalistic coverage from the ABC as illustrated in Figure 6. 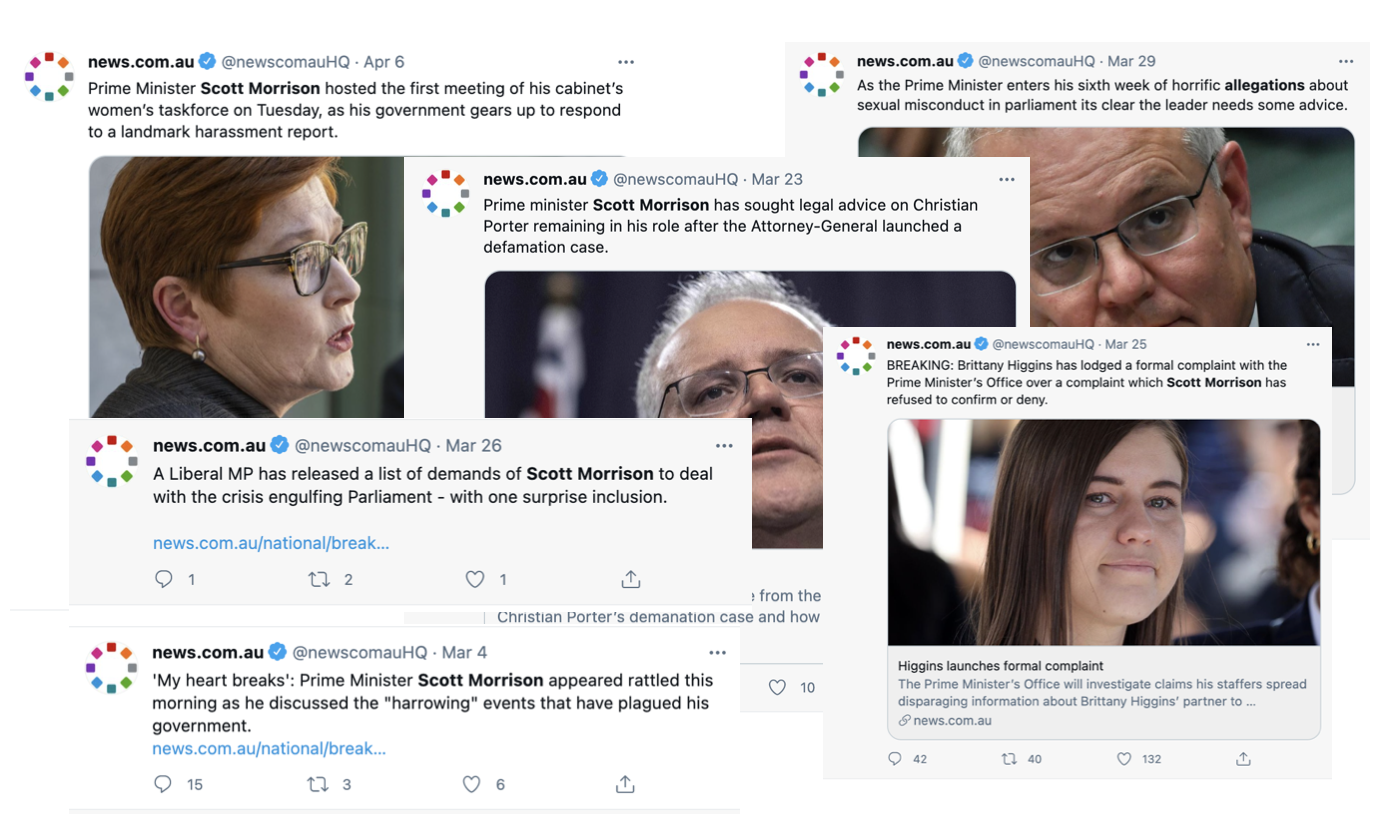 As illustrated in Figure 4, through the use of Twitter Advanced Search, it was possible to make a collage of posts that illuminate how News.com explicitly covers the Prime Minister’s most active approaches in dealing with the rape allegations as apposed to highlighting the neglectful missteps of the Prime Ministers leadership that is evident thought the social media coverage of the ABC.

It is also apparent that News.com focuses on reporting the Prime Minister’s most progressive movements in dealing with the allegations by informing readers of his desire to “personally meet the organisers of the Women’s March 4 Justice on Monday in Canberra” Despite New.com illuminating Mr Morrison’s more positive and approaches to the negativity unfolding ABC’s David Speer’s commentary on the Minsters ‘refusal’ in attending the rally asking “are you seriously saying you won’t have ten minutes to go and listen to the women who are coming to Canberra?” a comment evidently ignoring the Prime Minister’s clear attempts to involve himself with the rally.

By comparing the social media sentiments between the two media organisations (as illustrated in Figures 6 and 7) it becomes clear that although the ABC claims to be centralised with its journalistic content, the voice of biased left wing activism comes through the voices of those reporting, which in effect characterises Mr Morrison as an individual unfit for the the position as the Prime Minister of Australia though reckless and almost carless approaches to the seriousness of sexual harassment in Parliament.